Rising From the Past
The Texas Longhorn has followed a long trail to the 21st. Century. Its ancestors came from the shores of Spain, arriving with Columbus in 1493 at Saint Domingo. In 1521, Gregorio de Villalobos brought the first cattle from Santa Domingo to Mexico. Explorers, settlers and expeditions to establish missions then brought cattle into Texas. These cattle, mingling with cattle lost by eastern settlers, propagated as they escaped, were scattered by Indians or abandoned. Left on their own without benefit of man, these animals survived by their own ingenuity developing through the years the traits of hardiness, disease resistance, longevity, fertility and browse utilization. 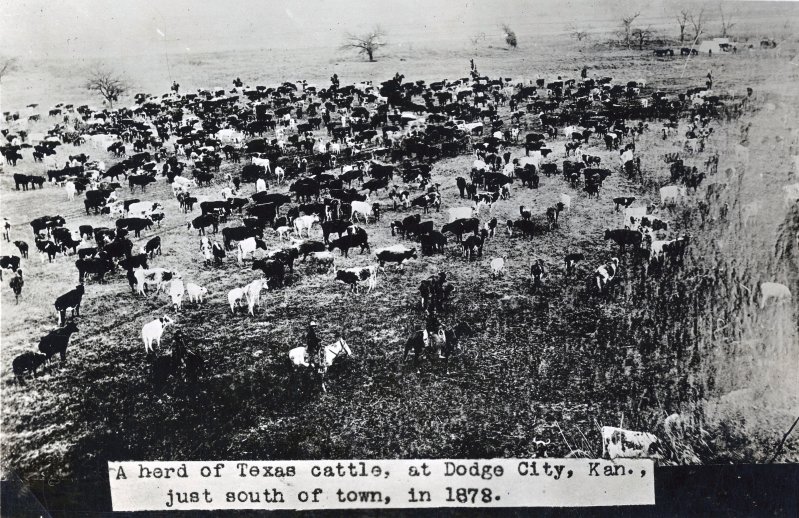 During the days following the American Civil War, the Texas longhorn became the financial salvation of the Southwest. Men returning home found that their only source of income was the thousands of Texas Longhorns wandering freely worth next to nothing in Texas, but hungered for by the residents in the North.

An estimated 10 million Texas cattle were trailed to northern markets between 1866 and 1895 bringing in the then staggering sum of $200,000,000. However, in the late 1800s, the hardy Texas Longhorn met with an enemy his natural instincts couldn't fight, the fencing of the open ranges and the importation of other beef breeds. Cattle were more valuable for their hides and tallow which mean't the lean Texas Longhorn was overlooked in favour of the beefier breeds of cattle from England.

The number of Texas Longhorns dwindled until the true Texas Longhorn approached extinction. As national concern grew, in 1927 the U.S. government appropriated $3,000 to acquire a herd of the old-time cattle. After a 5,000 mile trip through South Texas and Old Mexico, Forest Service employees located 23 head which became the foundation stock for the federal herd at the Wichita Mountains National Wildlife Refuge in Cache, Oklahoma.

Texas Longhorns were first imported into Australia in the early 1980's.

A dedicated group of breeders has managed to keep acquiring the latest genetics to where the quality of Longhorns in Australia is now of a very high standard. The breed registry Texas Longhorns Australia was formed in 2010.